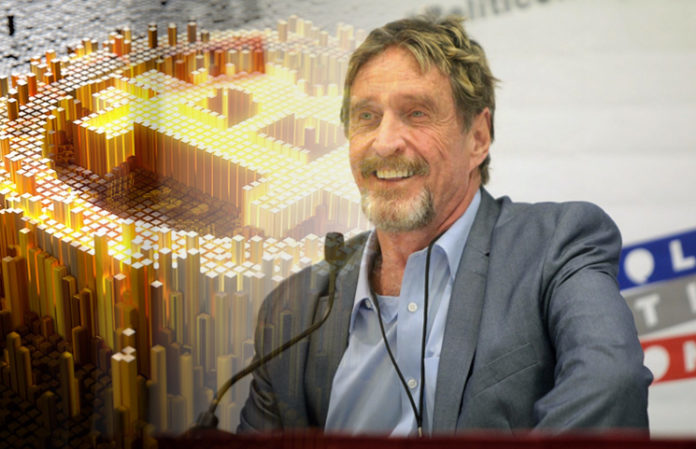 The world was caught pants downs when Donald J Trump beat Hilary Clinton to become the 45th president of the US in 2016. He has had a checkered term since then, and he has recorded the lowest ratings of a US president in the recent past. It was not strange then when John McAfee, the antivirus pioneer took to his Twitter to announce that he was in the running to be the US president in the upcoming presidential elections of 2020. He announced his candidacy and tied it to his role in the advocacy of cryptocurrency. In a statement, McAfee said that it would best serve the cryptocurrency community. An Itch That Will Not Go Away

McAfee once before vied for seat of the most powerful man in the world on Libertarian ticket in 2016, but lost to the former New Mexico’s governor Gary Johnson. He however retaliated that if the party were to consider him, he would run with them but if not, he would form his own party. He is upbeat about his odds this time round saying that what truly changes America is the process of creating a president and not the presidency. He pointed to his large following, saying that he is looking forward to stand on the world’s largest stage like last time, address everyone, and tell the truth.

McAfee a British-American computer programmer and entrepreneur founded McAfee Associates in 1987 and resigned 1994. His company found success after creating the first commercial antivirus software. Intel bought the company in 2011 and rebranded it to Intel Security but the software still maintains the McAfee name. He was worth $100 million in 2007, before his investments lost value during the global financial crisis that began in the same year.

He once live in Belize for several years, but after being suspected for the ordering the murder of Grerg Full, his neighbor, he left for Guatemala, and later returned to the US. He has had other run-ins with the law, such as unlicensed drug manufacturing and being in procession of an unlicensed weapon. As noted on CNET, while most people who are sympathetic to cryptocurrency and blockchain technology promote it to their large following pro bono, McAfee charges, $105,000 per tweet. His running for the presidency is sure to increase his Twitter followers as well as on other social media platforms, and this might increase his bottom line. McAfee has several other interests in yoga, smartphone apps, as well as all natural antibiotics. It is a waiting game to see if the Libertarian party will consider him to contest for the most powerful position in the world.